Here be my pithy, short, technical nuggets. Maybe I’m the only one who cares. Who says Hugo can’t be used for microblogging‽

I like the Mac utility «ImageOptim» for crunching down my image sizes, and there is a good 3rd party app called «imageoptim-cli» that facilitates batch automation and incorporates other utils as well. Sweet! 🗜

Learned about two cool apps by Adam Newbold at @neatnikllc - «Salty», a simple secure encryption site and «omg.lol» an email forwarder and simple web page host. 😎 Lots more on their portfolio too, check it out: https://neatnik.net/work/

If you are making DNS changes, you may want to flush your local dns responder cache, so here is how to do it. 🤖

On Windows, do this in a command prompt:

On Linux, it can be app by app or, on Ubuntu/Debian, you can do either of:

So Zoom acquired a beloved crypto app Keybase, and the announcement blog post is so fuzzy and laden with corporate double-speak, it feels almost certain that Zoom will sunlight the app. How unfortunate. Big windfall for @malgorithms and co, big fuck you to Keybase users. 🖕🏻

Many static site generators like Hugo have a built in dev web server. If you are just building some html with css, and need a simple solution to serve the files from any folder, you have a few solutions. See a couple of options:

Visit http://localhost:8080 and look at the help to change the port.

Then if you use zsh put it in a function in your ~/.zshrc:

An rsync command I was using in a git hook was giving an error regarding permissions not getting copied properly. I was copying to keybase kbfs, so it makes sense that it differs from standard Mac permissions. I fixed it by changing -a to -rlOtcv. 👍

Twurl uses ruby and broke, so I switched to CLI tweeting via a little golang utility called «twty». 🤓

One of golang’s main ideas is to allow apps to be installed easily on any platform, without needing to hassle with dependencies (Ruby, Python, I’m looking at you here). It’s lovely. Assuming you have golang setup, you just do:

There’s a cool blocks-based editor project called «editor.js» that outputs clean json, which is predictable when integrating with other systems (similar to how Notion’s editor works). I was wondering if there is a list of sites that use it, or a showcase of some kind, and learned that I can view a list of repositories that use it, via the Github “dependency graph”. Slick! 😎

Today I upgraded a Drupal site with drush, a convenient cli utility for Drupal, but managed to munge the site up. Fortunately I followed the usual steps, and used ./bin/drush archive-dump to back up prior to upgrading. It gives you a “Backups were saved into /path/to/backups/2020…” message, telling you where the backups were saved. This is my usual procedure:

The problem was, I upgraded to the latest without checking my php version, and the drush up failed with some weird error that some helpful soul posted about on Stack Overflow. Since upgrading php to 7.7 from my lowly 5.x is fairly involved, I just compared and restored the backup core files to the production site folder, and did:

Everyone is saying stay 2 meters apart and I mentioned this in a previous post, but research showed that COVID-19 virus can travel up to 4.5 meters. That’s something important to keep in mind.

So, correcting my earlier post, that’s one wavelength apart at 75 Mhz! Joking aside, that’s terrifying.

A geeky-funny Ham radio take on the idea of social distancing in this image from Twitter user @ai6yrham. 😂 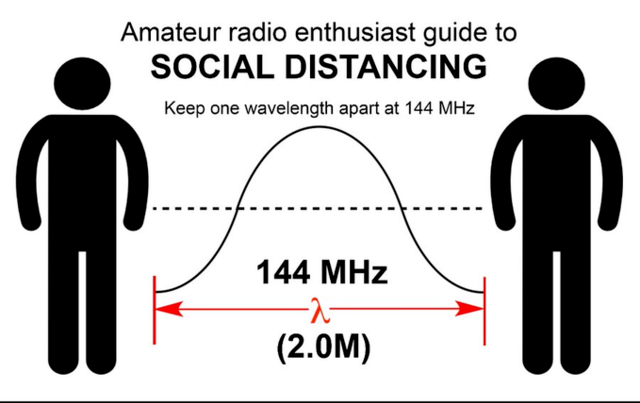 We are not quarantined in Japan (yet), but here is an idea to squelch the boredom: get a radio that can pick up shortwave, and do some BCL or broadcast listening. Last night I heard Beijing news on «Peking Hoso 7220 Khz on 41mb» in Japanese, talking about Coronoavirus and newborn pandas! 🐼

I have a Tecsun S-8800 which is a well-regarded portable radio that will take external antennas if you want them, can receive FM, MW (AM), SW, LW. Tecsun makes the AN-200, an external AM antenna which you can connect with a stereo connector if your radio has an input for that, or (in the case of the S-8000) you just set behind the radio and tune via its knob. It’s pretty amazing and works to improve the sound of AM stations.

Other stuff I learned:

I just love webhook.site. Simon Fredsted @fredsted has done such a great job on it, and the paid flavor is especially useful. 🤖🦾

It lets you set up a unique URL for receiving http actions POST, GET etc, and has a scripting language with which you can manipulate the inbound payload and take actions, parsing out json or xml. Really good stuff.

A little .gitignore tip: you can use regex to cover cases where reports you do not want in your repo have a date stamp. Nifty. 😎

I tried using the Post feature in Slack, and found that pasting code is buggy, and that you cannot easily copy a Post from one Slack Space to another. Uglay. Why u so beta, Slack?! 🐞

Read about this in the NY Times this AM - Prof Po-Shen Loh has re-introduced an ancient method for solving quadratic equations, which uses parabola symmetry as the key and provides cleaner proofs. Shh, squelch haters by not telling anyone that Babylonia was in present-day Iraq. 🤷‍♂️

If you need to generate a uuid, say for a unique filename, on mac you can do it via the uuidgen utility. Combine it with tr to remove the punctuation, and use pbcopy to slap it on the clipboard if you need. 🆔

I used the Simple Event Correlator «SEC» on a past project, and it is still maintained. It helps you monitor event logs using regex to detect fraud or attacks, by assigning meaning to patterns. Deep & interesting. 🔐

I use the CLI utility «jq» from stedolan a lot to manipulate json, and just bought a helpful Mac app called «jqTerm», from @rem Remy Sharp. 🤓🔥

It is similar to the existing jq playground, but has a pretty comprehensive set of built-in examples that are easy to load and play with, and lets you save your jq examples to the jqterm dot com site for sharing. Sweet!